Paul W. Kruse, 74, is a lifelong resident of St. Louis, MO area. He spent his childhood in Florissant, then moved to St. Charles County and graduated from Francis Howell High School in 1965. He attended Southeast Missouri State College at Cape Girardeau, then served in the U.S. Navy during the Vietnam War as an airman and seaman. Paul currently lives in Lake St. Louis with his wife, Lana. They have four adult children and eight grandchildren and four great-grands.

In 2001, Paul and Lana established a ministry to serve over-the-road truckers in Foristell, MO at the TA Truck Stop on Highway 70. This Trucker Church Ministry still exists today, and has now provided Christian services to more than 6,000 truckers. In March, 2003, KMOV’s Jamie Allman did a feature story on the Trucker Church Ministry and its valuable influence on over-the-road truckers seeking the Gospel.

During Paul’s early involvement with the Trucker Church Ministry, he became aware of the lack of resources and gaps in service by local social service providers for the homeless in St. Charles County. In early 2005 he began researching the homeless problem, became involved with the St. Charles County Continuum of Care group, and started to consider what he could personally do to meet needs of homeless who were coming to him for help at the TA Truck Stop during Trucker Church services.

In March, 2005, Paul founded the First Step Back Home (FSBH) Homeless Ministry, spawned by a $1,000 gift from a local business that helped cover outlays he had been personally making to assist the homeless. FSBH was established as a qualified 501(c)(3) public charity in February, 2007. In 2009, Paul retired from his home repair business of 18 years, Christian Handyman, to focus all of his attention on what he considered to be a serious local homeless problem. By the grace of God and the glory of the Gospel, FSBH has assisted more than 9,000 homeless in the local area to date in getting lodging, food, clothing, jobs, and transportation, in their quest to become self-supporting. 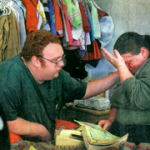 FSBH now assists many of the homeless, usually referred by the 2-1-1 System and social service agencies, churches, hospitals, police departments, individuals, local businesses and government. It is important to note, and key to the program’s good success rate to date, that assistance is provided only to those individuals who are capable of, and agree in advance to, actively seeking self-supporting status. Eligibility criteria and screening serve to eliminate active addicts, con artists, those who have serious physical or mental handicaps that would prevent them from finding work in the near term, and those not honestly interested in seeking work at all.

FSBH focuses on helping those capable of, and truly interested in, working at becoming self-supporting. In working to track the status of those to whom help has been provided, more than 50% of those served by FSBH have achieved self-supporting lifestyles.

Volunteer time and financial support for FSBH has come exclusively from the local community, via individuals, churches, businesses, and community groups. Awareness of FSBH’s efforts and successes has greatly increased from articles in local newspapers, TV and radio spots, state magazine publications, and numerous community and state awards.

As a Vietnam Vet, Paul has seen war. Through FSBH, he along with Lana and their volunteers wage serious war on local homelessness and poverty. They believe through experience and research that the only answer to the homeless problem is that those who are presently self-sufficient commit to assisting those who are not. It is written in Galatians 6:2 that we are to “Bear one another’s burdens, and therefore fulfill the law of Christ.”

While prayer for those in need is most certainly desired and encouraged, there must also be tangible commitments and acts of love, in the form of volunteerism and financial assistance, in order to greatly reduce the serious homeless situation existing today.